Chichen Itza was a large Mayan city in Yucatán that lasted from the late classic to the early postclassic era.

Chichen Itza was a major power in the Northern Maya Lowlands from the Late Classic (circa 600-900 CE) through the Terminal Classic (circa 800-900 CE), and its influence seems to have continued into the early Postclassic period as well (circa 900-1200 CE).

Today, it one of the most well-visited of the Mexican archaeological sites, and data from the year 2017 show that over 2.6 million people visited the site that year.

Until 2010, the land under the monuments was privately owned. On 29 March that year, the land was purchased by the state of Yucatán. The ruins themselves are federal property and maintained by Mexico´s Instituto Nacional de Antropología e Historia (National Institute of Anthropology and History).

Chichen Itza was added to the UNESCO World Heritage List in 1988.

Chichen Itza is located in the eastern part of the Yucatán state.

Chichen Itza contained at least five square kilometers of a fairly densely built-up urban landscape, plus smaller-scale residential neighbourhoods that extended beyond this centre. Many of the stone buildings in the city were painted in red, green, blue and purple. The city contained an elaborate network of paved causeways (sacbeob) and archaeologists have identified over 80 of them.

Tracts of land had been levelled by man prior to the creation of certain major building groups, such as the Castillo Pyramid, Las Monjas and Osario. The Castillo Pyramid (Temple of Kukulkan) is a part of the Great North Platform complex, which also includes the Temple of Warriors and the Great Ball Court. The Osario groups contain the Osario Pyramid and the Temple of Xtoloc, while Las Monjas belong to the Central Group together with Akab Dzib and Caracol.

Interestingly, the Chichen Itza architecture show influences from several different styles, including Chenes and Puuc. The presence of styles from other regions was once interpreted as evidence of migration or conquest, but most contemporary scholars think it was simply the result of cultural diffusion.

The Temple of Kukulkan

At Chichen Itza, the Northern Platform is dominated by the Temple of Kukulkan, aslo known as El Castillo (The Castle). In Manyan myth, Kulkulkan is a feathered serpent deity.

The construction consists of a steep pyramid (roughly 30 meters tall) crowned with a 6-metre tall temple on the summit. The surface of the pyramid is a series of nine square terraces, each more than 2.5 metres high.

Each of the four faces of the pyramid has protruding stairways at an angle of 45 degrees, and carved serpent heads adorn the base of the balustrades at the northeastern staircase. 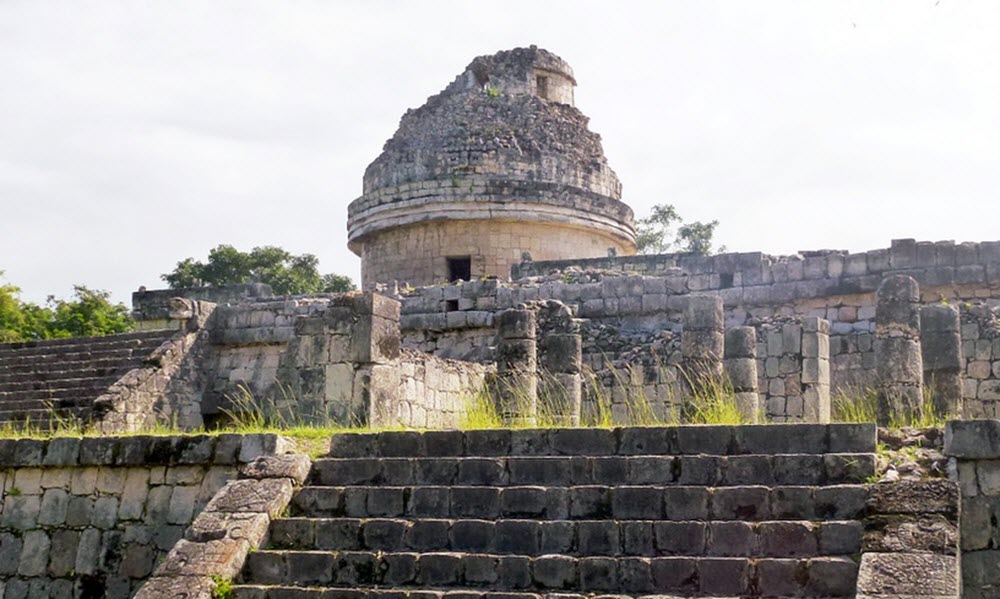 In the 1930s, excavations revealed another temple buried under the current one. Inside the chamber was a jaguar-shaped throne and a Chac Mool statue. The throne was painted red, with spots made from inlaid jade.

Around the Spring equinox and Fall equinox, the northwestern corner of the pyramid will cast a series of triangular shadows against the western balustrade on the north side in late afternoon. The pattern resembles that of a serpent wriggling down the staircase. The phenomenon can be observed for several weeks around both equinoxes.

The northern Yucatán Peninsula is karst and the rivers in the interior run underground. Four large cenotes (sink holes) are located near Chichen Itza, including the famous Cenote Sagrado. It is possible that these cenotes, which can provide water year round, was a major factor in the city´s development.

In 1904-1910, Cenote Sagrado was dredged and numerous artefacts were recovered, including human remains, gold, jade, pottery, and incense. The human remains had wounds that might indicate human sacrifice. According to post-Conquest sources (both Mayan and Spanish), the pre-Conquest Mayans made sacrifices into Cenote Sagrado to appease the rain god Chaac.