Teotihuacán was an ancient city and is today one of the most renowned of the Mexican archaeological sites.

The site, which covers 83 square kilometers, was added to the UNESCO World Heritage List in 1987 and is today one of the most visited of the Mexican archaeological sites. Data from the year 2017 show that in that year, well over 4 million people visited the remnants of this classic city.

During its zenith, Teotihuacan had a population of at least 125,000 people. It is the site of several large pyramids, beautiful murals and complex multi-floor, multi-family homes.

The city was established as a religious centre around the 1st century CE and is believed to have lasted until sometime between the 7th and 8th centuries CE. It should be noted, however, that the major monuments of Teotihuacán were sacked and deliberately burned around 550 CE.

After the collapse of Teotihuacán, the Toltecs of Tula ruled central Mexico, but knowledge of the huge ruins of Teotihuacan was never lost. Various other peoples lived on or near the site, and during the Aztec epoch, the city was identified with the myth of Tollan and became a pilgrimage destination.

Minor archaeological excavations of the site have taken place since the late 17th century, but the first major one was the excavation, research and restoration project started by archaeologist Leopoldo Batres in 1905.

A railway was built in 1908 that made it easier for tourists to visit, and the Pyramid of the Sun was restored in time for the Mexican Independence celebrations of 1910.

Excavations then continued throughout the 20th century, including the large site-wide research project headed by Mexico´s Instituto Nacional de Antropología e Historia in 1960-1965. Among other things, this project cleared the Avenue of the Dead and consolidated the buildings facing this street.

In the early 1970s, workers preparing for a sound and light show at the site accidentally discovered the entrance to a tunnel and manmade cave system underneath the Pyramid of the Sun.

The Pyramid of the Feathered Serpent was excavated and partly restored in 1980-1982, combined with more work with the Avenue of the Dead complex. 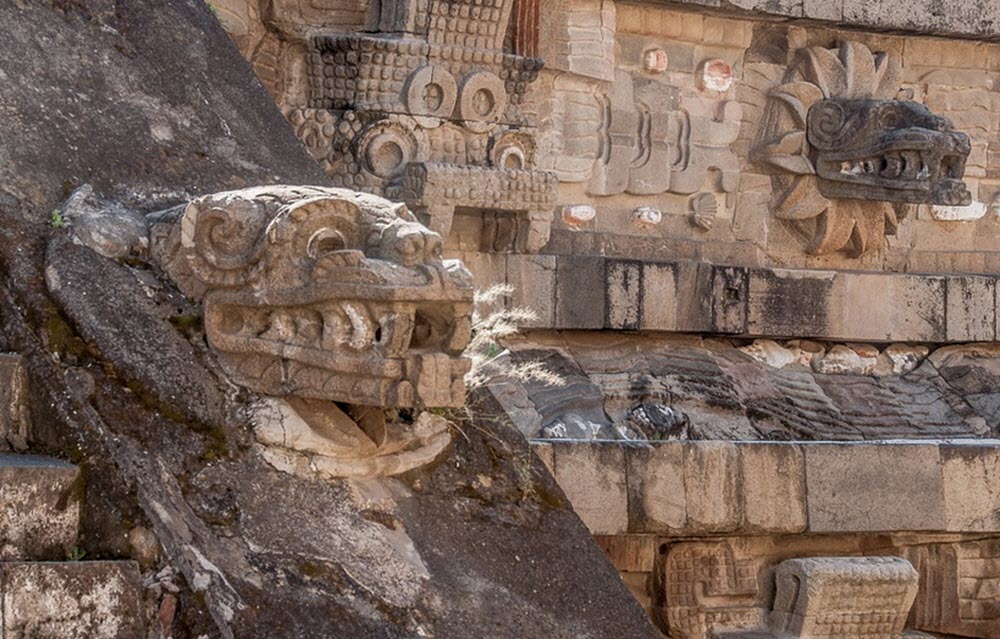 The tunnel and chambers below the Pyramid of the Feathered Serpent

After a heavy rainstorm in late 2003, archaeologists working on the site noticed a new sinkhole near the foot of the Pyramid of the Feathered Serpent. This sinkhole revealed a tunnel running beneath the pyramid; a tunnel that had been blocked in both directions by huge stones. Further research showed that a nearly 100-meter long corridor runs under the pyramid, ending in a series of underground galleries in the rock.

Examples of items found under the pyramid are spiral seashells, pottery, cat bones, wooden masks adorned with inlaid rock jade and quartz, greenstone crocodile teeth, eye-shaped crystals, human figurines, jaguar sculptures, and beetle wings arranged in a box. A large number of globes were discovered in both the north and south chambers, ranging in size from just 4 cm to 13 cm. The balls have a clay core covered in yellow jarosite.

Four greenstone statues were found at the end of the passage, of which two were still in their original position – leaning back and looking upward. They wore garments and beads and carried bundles of pendants and pyrite mirrors.

One of the most surprising finds under the pyramid was a miniature mountainous landscape built 17 meters underground.