Cozumel is a Caribbean island off Mexico´s Yucatán Peninsula. It is a very popular tourist destination with lovely beaches and a vibrant nightlife. Examples of popular pastimes are scuba diving and snorkelling, as the water is warm and clear, and the marine life amazing.

Cozumel is Mexico´s third-largest island, and the largest permanently inhabited one. The islands Tiburón and Isla Ángel de la Guarda are larger than Cozumel but have no permanent populations.

Large parts of the island Cozumel are covered in mangrove forests which are rich in wildlife.

The Mayan name for this island was Ah Cuzamil Peten, which means Island of the Swallows. The short version of the name was Cuzamil, which in turn became Cozumel.

San Miguel de Cozumel is the main town on the island and this is where a majority of the islanders live. You´ll find it on the western shore of Cozumel.

The climate is of the tropical savanna variety, but bordering on tropical monsoon.

The dry season runs from February to April, but some rain fall even during these months.

The rest of the year is considered the rainy season, with September and October being the wettest months.

The air is usually quite humid year round, since the ocean brings humidity.

The temperatures are fairly stable year-round, but December and January are a bit cooler than the rest of the months.

Cozumel is a flat limestone island where the highest point is less than 15 meters above the sea level.

As in many other parts of the world, the limestone here has slowly been dissolved by water over the years, resulting in a karst topography with sinkholes. The cenotes of Cozumel are deep water-filled sinkholes created over the course of thousands of years. Scuba diving in the cenotes is only suitable for qualified cave divers.

Both wetlands are protected under the Ramsar Convention, and are also included in the UNESCO acknowledged Isla Cozumel Biosphere Reserve. In addition to this, Arrecifes the Cozumel is a National Park. 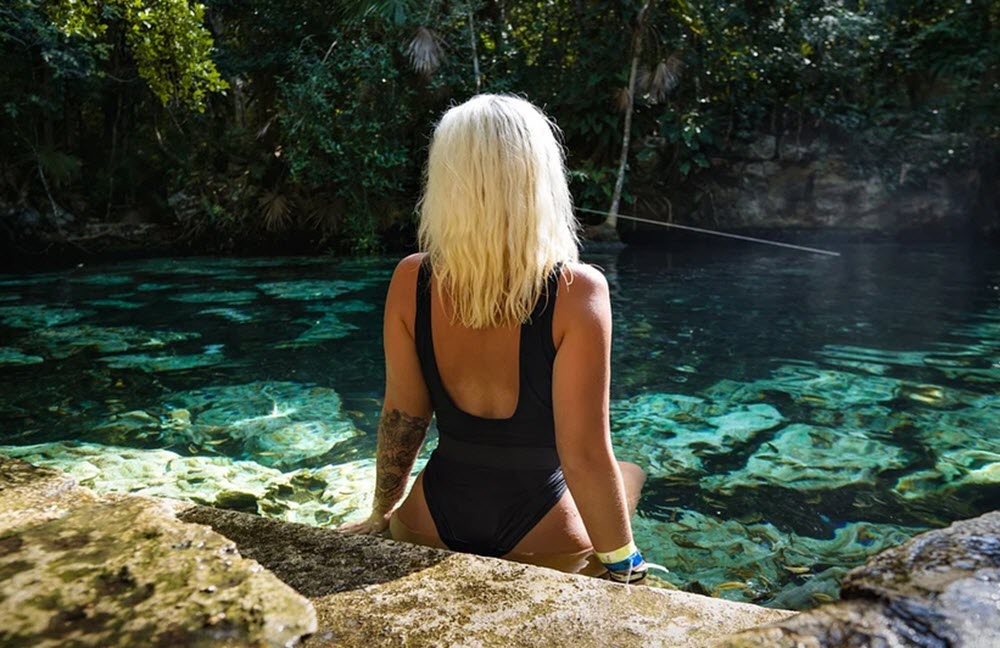 The coral reefs near Cozumel support a rich biodiversity of plants and animals and are a part of the large Mesoamerican Barrier Reef System – the second largest reef system in the world.

The reef-building corals near Cozumel are chiefly found growing on underwater cliffs, but there are also coastal lagoons here and some coral growth on sand bars.

Both hard corals and soft corals grow near Cozumel, and the reefs are home to an abundance of molluscs, sponges, hydroids, polychaets, zoanthids, actinarians, echinoderms, and more. Naturally, there is also a lot of fish here, including the endemic Splendid toadfish.

Cozumel used to be famous for its black coral, which grew fairly deep down. Overharvesting had a very damaging impact on the black corals here from the 1960s to the mid-1990s, and they have still not recovered.

A large portion of the coral reef located south of Cozumel is protected since it is inside the Parque Nacional Arrecifes de Cozumel (Arrefices de Cozumel National Park).